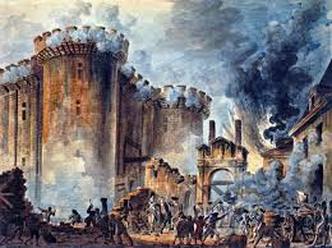 Jean-Pierre-Louis-Laurent Houël (1789). Prise de la Bastille. Paris: France
Ancien régime: (French: “old order”) Political and social system of France prior to the French Revolution. Under the regime, everyone was a subject of the king of France as well as a member of an estate and province. All rights and status flowed from the social institutions, divided into three orders: clergy, nobility, and others (the Third Estate). There was no national citizenship. (Britannica 2015)

Bastille: A medieval fortress-prison in eastern Paris. Frequently used for the subjects/victims of arbitrary royal authority, it held only seven prisoners in 1789. Yet, the Bastille remained a potent symbol of royal power. It was seized by the Paris crowd on 14 July 1789; this event marked the end of the absolute monarchy and the beginning of a new era. The date of the fall of the Bastille is a French national holiday

​Capitalism: Capitalism is an economic system in which trade, industry, and the means of production are privately owned and operated via profit and loss calculation through the price system. Central characteristics of capitalism include private property, capital accumulation, wage labour and, in some situations, fully competitive markets. In a capitalist economy, the parties to a transaction typically determine the prices at which they exchange assets, goods, and services.

​Civil constitution of the clergy:  (French: "Constitution civile du clergé") was a law passed on 12 July 1790 during the French Revolution that subordinated the Roman Catholic Church  in France to the French government.

​Committee of Public Safety: (French: Comité de salut public), created in March 1793 by the National Convention  and then restructured in July 1793, formed the de facto executive government in France during the Reign of Terror (1793–94)/ The Committee of Public Safety succeeded the previous Committee of General Defence (established in January 1793) and assumed its role of protecting the newly established republic against foreign attacks and internal rebellion.
​
Communism: In political and social sciences, communism is a social, political, and economic ideology and movement whose ultimate goal is the establishment of the communist society, which is a socioeconomic order structured upon the common ownership of the means of production and the absence of social classes, money, and the state.

Coup of 9 Thermidor year II (27th July 1794): The period in which Maximilien Robespierre was overthrown and executed.

Declaration of the Rights of Man and of the Citizen, French Declaration (des Droits de l’Homme et du Citoyen), one of the basic charters of human liberties, containing the principles that inspired the French Revolution. Its 17 articles, adopted between August 20 and August 26, 1789, by France’s National Assembly served as the preamble to the Constitution of 1791 (Britannica 2015)

Democracy: Democracy, or democratic government, is "a system of government in which all the people of a state or polity... are involved in making decisions about its affairs, typically by voting to elect representatives to a parliament or similar assembly,

Emmanuel-Joseph Sieyès: French churchman and constitutional theorist who because he was not of noble birth, could not advance in the clergy. He was embittered towards the aristocracy and in January 1789 Sieyès issued his his pamphlet  “What Is the Third Estate?,  in which he identified the unprivileged Third Estate with the French nation and asserted that it alone had the right to draft a new constitution where the third estate had more power as they were the majority. (Britannica, 2015).

Enlightenment: a European intellectual movement of the 17th and 18th centuries in which ideas concerning God, reason nature, and humanity were synthesized into a worldview that gained wide assent in the West and that instigated revolutionary developments in art, philosophy, and politics.

Estates-General: the representative assembly of the three “estates,” or orders of the realm: the clergy and nobility—which were privileged minorities—and a Third Estate, which represented the majority of the people (Britannica, 2015).

Gabelle:  form of tax in France before the Revolution of 1789. The high rate and unequal distribution of the gabelle provoked widespread contraband dealing in salt by smugglers. The gabelle’s unpopularity was forcefully expressed in the lists of grievances drawn up for the Estates-General of 1789 on the eve of the revolution. The gabelle was abolished in March 1790 (Britannica, 2015)

Georges Jacques Danton: (26 October 1759 – 5 April 1794) was a leading figure in the early stages of the French Revolution and the first President of the Committee of Public Safety. He was succeeded by Maximilien Robespierre

The Guillotine (called the "National Razor") was an execution tool that became the symbol of the revolutionary cause. It had a large blade attached to a plank of wood that would be raised high and then dropped, cutting off the victims head.

Jacques Roux: (21 August 1752 – 10 February 1794) was a radical Roman Catholic Priest who took an active role in the revolutionary politics during the French Revolution.

​Jacques Hebert: (15 November 1757 - 24 March 1794) was a French journalist, and the founder and editor of the extreme radical newspaper Le Pere Duchesne during the french revolution.

Jean-Paul Marat (24 May 1743 – 13 July 1793) was a physician, political theorist and scientist best known for his career in France as a radical journalist and politician during the French Revolution.

Lazare Nicolas Marguerite Carnot (13 May 1753 – 2 August 1823), the Organizer of Victoryin the French Revolutionary Wars. He was a French politician, engineer,freemason and mathematician.

Liberalism: Liberalism is a political philosophy or worldview founded on ideas of liberty and equality. The former principle is stressed in classical liberalism while the latter is more evident in social liberalism.

Marie Antoinette: (2 November 1755 – 16 October 1793), Queen of France and Navarre from 1774 to 1792. She was the fifteenth and penultimate child of Francis I, Holy Roman Emperor and Empress Maria Theresa. Her Husband was Louis XVI King of France.

Maximilien Robespierre: radical Jacobin leader and one of the principal figures in the French Revolution. In the latter months of 1793 he came to dominate the Committee of Public Safety, the principal organ of the Revolutionary government during the Reign of Terror, but in 1794 he was overthrown and executed in the Thermidorian Reaction (Britannica, 2015).

National Assembly: From June 17 to July 9, 1789, it was the name of the revolutionary assembly formed by representatives of the Third Estate;

Philosophes: French philosophers such as Voltaire, Rousseau, Montesquieu, Buffon and Diderot who questioned traditional authority and embraced the notion that humanity could be improved through rational change. The Enlightenment produced numerous books, essays, inventions, scientific discoveries, laws, wars and revolutions

Revolution: is a fundamental change in power or organisational structures that takes place in a relatively short period of time. There are two types of political revolution. 1.Complete change from one constitution to another and 2. Modification of an existing constitution.

Sans-Culottes: The common people of the lower classes in late 18th C. France. The great many of whom became radical and militant partisans of the French Revolution in response to their poor quality of life under the Ancien Regime.

Socialism: Socialism is a social and economic system characterised by social ownership and/or social control of the means of production and co-operative management of the economy, as well as a political theory and movement that aims at the establishment of such a system.

The Enraged Ones (French: Les Enragés) were a small number of firebrands known for defending the lower class and expressing the demands of the radical Sans-Culottes during the French Revolution. They played an active role in the May 31-June 2, 1793 Paris uprisings that forced the expulsion of the Girondins from the National Convention.

The Gironde: (French: La Gironde), whose members called Girondists (French: Girondins), were a political group in France in 1791–95 within the Legislative Assembly and the National Convention during the French Revolution. Girondists were part of the Jacobin movement, though not every Girondist was a member of the Jacobin Club.

The Jacobin Club: (Society of the Friends of the Constitution) commonly known as the Jacobin Club (Club des Jacobins) was the most famous and influential political club in the development of the French Revolution. Initially founded by anti-Royalist deputies from Brittany, the Club grew into a nationwide republican movement. The Jacobin Club included both prominent parliamentary factions of the early 1790s, the radical 'Mountain' and the more moderate 'Girondists'.

The Reign of Terror (5 September 1793 – 28 July 1794) also known as The Terror, was a period of violence that occurred after the onset of the French Revolution.

The Law of Suspects (French: Loi des suspects) was a decree passed by the Committee of Public Safety on 17 September 1793, during the Reign of Terror. It marked a significant weakening of individual freedoms that led to "revolutionary paranoia" that swept the nation. (Britannica, 2015)

The Tennis Court Oath:  (June 20, 1789)a  dramatic act of defiance by representatives of the Third Estate during the meeting of the Estates-General (traditional assembly) at the beginning of the French Revolution. Finding themselves locked out of their usual meeting hall at Versailles on June 20 and thinking that the king was forcing them to disband, they moved to a nearby indoor tennis court (salle du jeu de paume). There they took an oath never to separate until a written constitution had been established for France. (Britannica, 2015)

The Revolutionary Tribunal: (French: Tribunal révolutionnaire) was a court which was instituted in Paris by the Convention during the French revolution for the trial of political offenders, and eventually became one of the most powerful engines of the Reign of Terror.

Women's Revolt: 5 October 1789. Women March on Versailles in anger against the lack of food and the extreme poverty levels.