1789 the first year of the french revolution 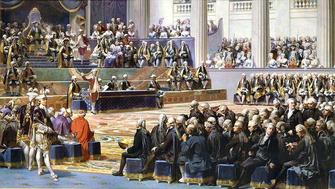 Auguste Couder (1789). The Opening of the Estates General. Paris: France
1789 is considered the beginning of the French Revolution. Many different events effected the social, political and economic life of France.

In January 1789, Emmanuel Sieyès produced a political pamphlet called, “What is the Third Estate?” It was one of the French Revolution’s most significant and influential political texts, shaping the course of events in 1789. It made Sieyès immensely popular and leaders of The Third Estates in the push to gain political independence from the King used his ideas.  There was a huge public push to convene the government and sort out the economic issues that were plaguing France.

THE ESTATES-GENERAL (5 MAY 1789)
The Estates-General convened in Versaille (near the Royal palace) after months of back and forth between the King and the clergy and the dissatisfied members of the third estate.  It was assembled in order to propose solutions on the extremely dire financial situation in France.  They came to impasse over the first item on the agenda; whether they should vote by estate, giving the first two estates an advantage, which was the king's choice, or vote all together, giving the Third Estate the advantage. Louis XVI would not accept the demands of the Third Estate to have equal voting rights as this would mean they would definitely gain greater political power.

The members of the Third Estate declared this situation unacceptable and despite some initial attempts at coming to terms with the other two estates, on May 28, the Third Estate began meeting without the consultation of the other two, functioning on their own rules and independently determining the legitimacy of French government officials. This would be the beginning of The National Assembly.

June 17th 1789: THE NATIONAL ASSEMBLY
By June 17th, the Third Estate now declared itself the National Assembly of France. They acted completely independent of the First and Second Estates and they declared that taxation laws were illegal and made promises to institute new, fairer legislation that would see the wealthy nobility be taxed. The implementation of the National Assembly was extremely significant for the revolutionaries as it began the decline in power that Louis XVI had in government matters.

June 20th 1789: THE TENNIS COURT OATH
In an attempt to disband the National Assembly, the King had the meeting rooms they used locked on June 17th. In an act of defiance the members of the National Assembly met across the street in one of the king's indoor tennis courts. They then created and pledged the Tennis Court Oath to remain there until the National Assembly had written a fair French constitution. In the face of the solidarity of the Third Estate, King Louis XVI  relented and on June 27 ordered the clergy and the nobility to join with the Third Estate in the National Assembly. Initially seeming to accept the orders the people turned completely on the King when he surrounded Paris with troops and dismissed Jacques Necker, a popular minister of state who had supported reforms. In response, mobs began rioting in Paris at the instigation of revolutionary leaders.

July 14th 1789: STORMING OF THE BASTILLE
The Bastille was the prison in Paris that housed political prisoners. It was seen as a symbol of the royal tyranny that the revolutionaries were fighting to abolish. The angry Parisians encouraged by the revolutions leaders stormed the Bastille in order to get weapons to fight back against the armed forces sent by The King. It became the defining act of the French Revolution and the capture of the Bastille symbolized the end of the ancien regime and provided the French revolutionary cause with an irresistible momentum. Joined by four-fifths of the French army, the revolutionaries seized control of Paris and then the French countryside, forcing King Louis XVI to accept a constitutional government.  In the countryside, peasants and farmers revolted against their feudal contracts by attacking the manors and estates of their landlords. King Louis XVI was also forced to withdraw the royal troops from Paris.

26th August 1789: Declaration of the Rights of Man and Citizen
One of the most important documents to emerge from the French Revolution was the “Declaration of the Rights of Man and of the Citizen” written by the Marquis de Lafayette in 1789. This document was based on the United States Constitution, which had just been drafted and stood as a model for the French republic. It embodied the principles of equality that inspired the French Revolution. Its 17 articles, adopted between August 20 and August 26, 1789, by France’s National Assembly served as the preamble to the Constitution of 1791.
​
5th October 1789: WOMEN MARCH TO VERSAILLES IN RESPONSE TO FOOD CRISIS
Many people in Paris and the rest of France were hungry, unemployed and restless. In October, a large crowd of protesters, mostly women, marched from Paris to the Palace of Versailles, convinced that the royal family and nobility there lived in luxury, oblivious to the hardships of the French people. They broke into the quarters of Queen Marie Antoinette who as an Austrian was particularly despised. The crowd demanded bread and wanted to bring the King and his family back to Paris to “live among the people”. Louis conceded to their demands and agreed to go to Paris with the mob, believing it would only be a temporary inconvenience.
Reference List
​
Christopher Sailus. (2015). The National Assembly of France: Creation, History & Impact 7 [web]. October 2015, from http://study.com/academy/lesson/the-national-assembly-of-france.html

History Channel. 2015). The Storming of The Bastille.